Explore the NORTH OF MALTA

(15% discount applies to pre booking only)

Pick up from Palazzin Hotel.

Operated on most days, but highly recommend Sunday for Marsaxlokk Market.

Special Prices for groups and children.

(Choose from Category – All) 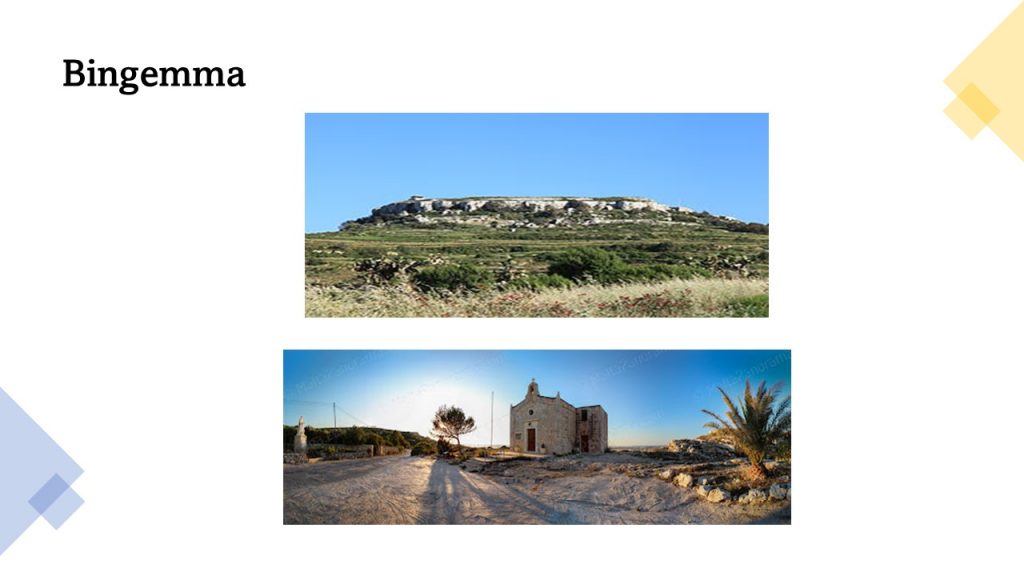 Sliema (Maltese: Tas-Sliema Maltese pronunciation: [tas.ˈslɪː.ma]) is a town located on the northeast coast of Malta in the Northern Harbour District. It is a major residential and commercial area and a centre for shopping, bars, dining, and café life. It is also the most densely populated town on the island.

Lining the coastline is a promenade known as the Sliema Front that has become the ideal spot for joggers and walkers as well as a prolific meeting place for locals during the summer season. Romantic moon strolls, barbeques and open air restaurants and cafes have made Sliema the hub of social nightlife. Sliema is also known for its numerous rocky beaches, water sports and hotels.

Sliema, which means ‘peace, comfort’, was once a quiet fishing village on the peninsula across Marsamxett Harbour from Valletta and has views of the capital city. The population began to grow in 1853 and the town was declared a parish in 1878. Now Sliema and the coastline up to neighbouring St. Julian’s constitutes Malta’s main coastal resort.

Sliema is considered a desirable place to live and is relatively affluent, with extremely high property prices compared to the national average. 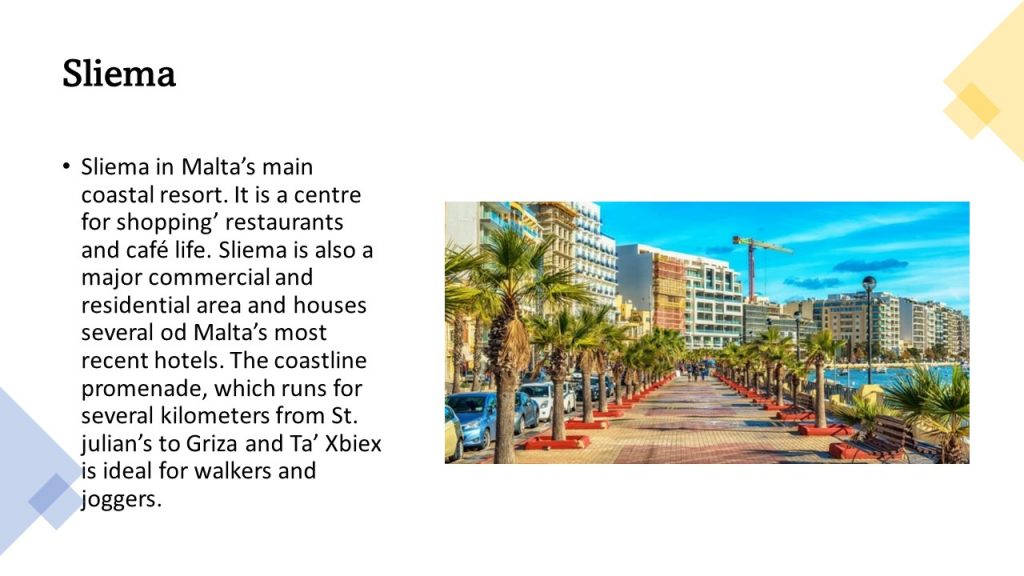 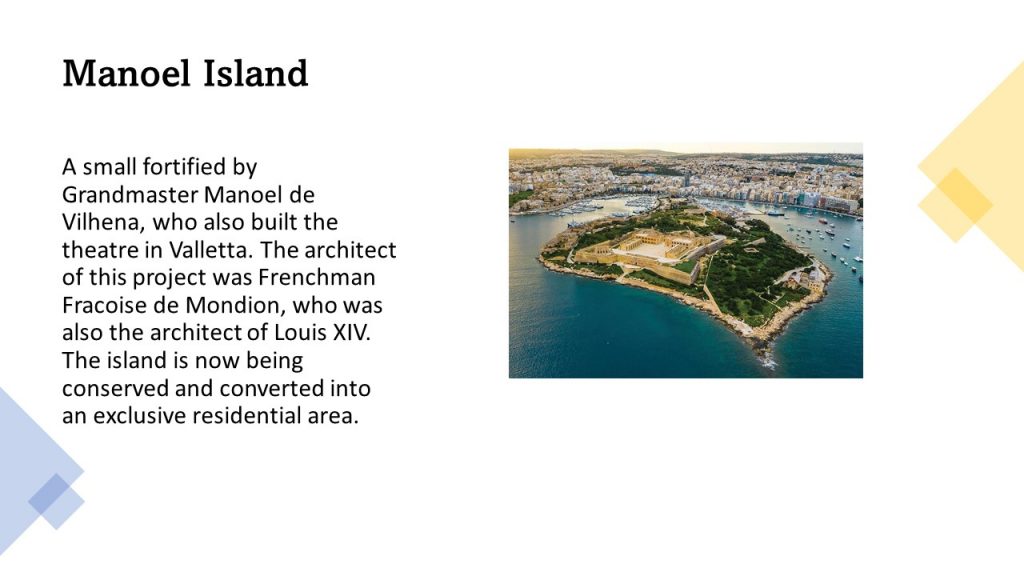 Manoel Island is a flat island shaped roughly like a leaf. It is located in the middle of Marsamxett Harbour, with Lazzaretto Creek to its south and Sliema Creek to its north. The island is connected to mainland Malta by a bridge. The whole island can be viewed from the bastions of the capital Valletta.[1]

For countless years in the 1950s a vast amount battleships were berthed in the Msida and Ta’ Xbiex marina. From the1960s right up until today, Ta’ Xbiex hosts many private boats with people from all nationalities making this location their berthing home for short as well as long stays.

The Msida and Ta’ Xbiex Marinas – many times referred to as the Sliema Marina –  form the largest marina in Malta. These Marinas together provide mooring facilities for more than 700 boats on 15 serviced pontoons. It is  located inside Marsamxett Harbour, which makes it safe and well sheltered, as well as conveniently central. 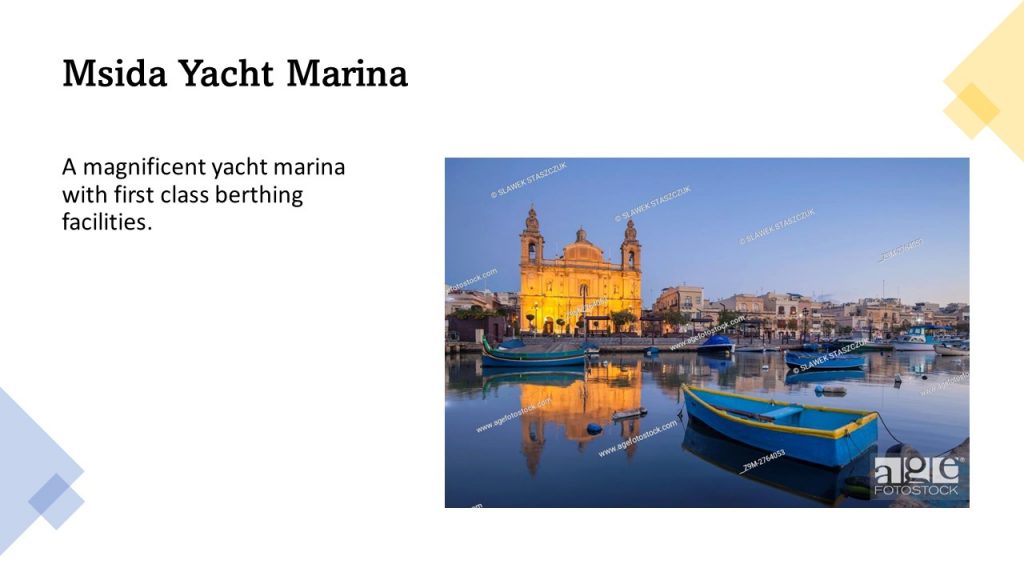 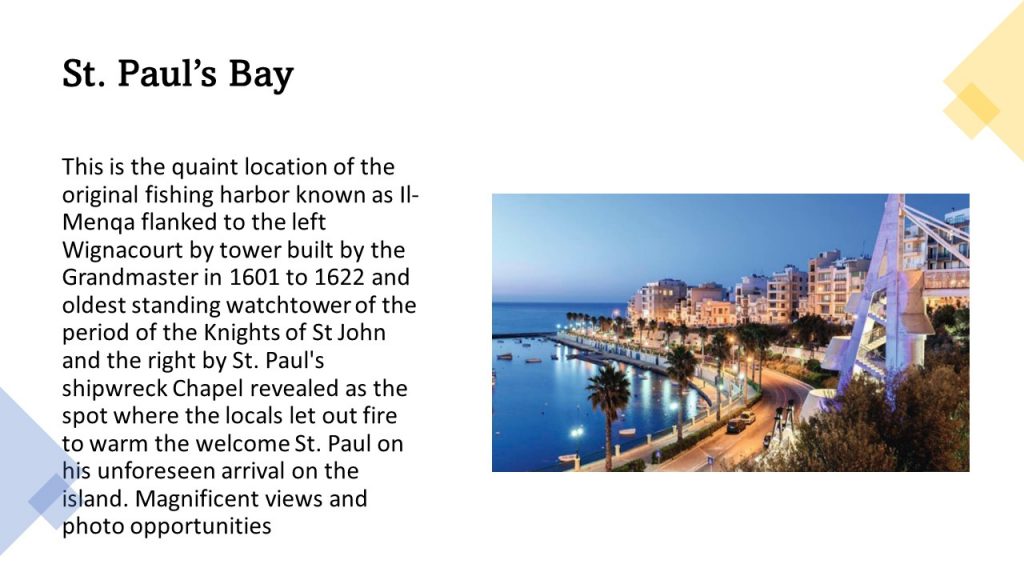 Its name refers to the shipwreck of Saint Paul as documented in the Acts of the Apostles on St. Paul’s Islands near St Paul’s Bay, on his voyage from Caesarea to Rome, which laid the foundations of Christianity on the island.

Burmarrad, Wardija, Qawra, Buġibba, Xemxija, and San Martin, as well as part of Bidnija and Mistra, form part of St. Paul’s Bay Local Council.[3] The area of the locality is 14.47 km2 (6 sq mi).

The population in 2018 was 23,112. This goes up to about 60,000 between June and September with Maltese residents and tourists lodging in hotels, especially in Buġibba and Qawra.

Heading north is Mistra Bay, its headland and St Paul’s Island. Going west and crossing the island towards Ġnejna Bay and Golden Bay is the scenic Wardija Ridge.

Golden Bay is located next to Għajn Tuffieħa on the north-west coast of Malta, nearby the village of Manikata and known for its red sand and naturally formed dunes on its surrounding slopes. Golden Bay is a popularly visited beach, partly due to the proximity of the five star Radisson Golden Sands hotel.

Like Għajn Tuffieħa, Golden Bay is a sandy beach, but it tends to be more popular because it has a larger stretch of sand, is easier to access and has better facilities, including a few restaurants. 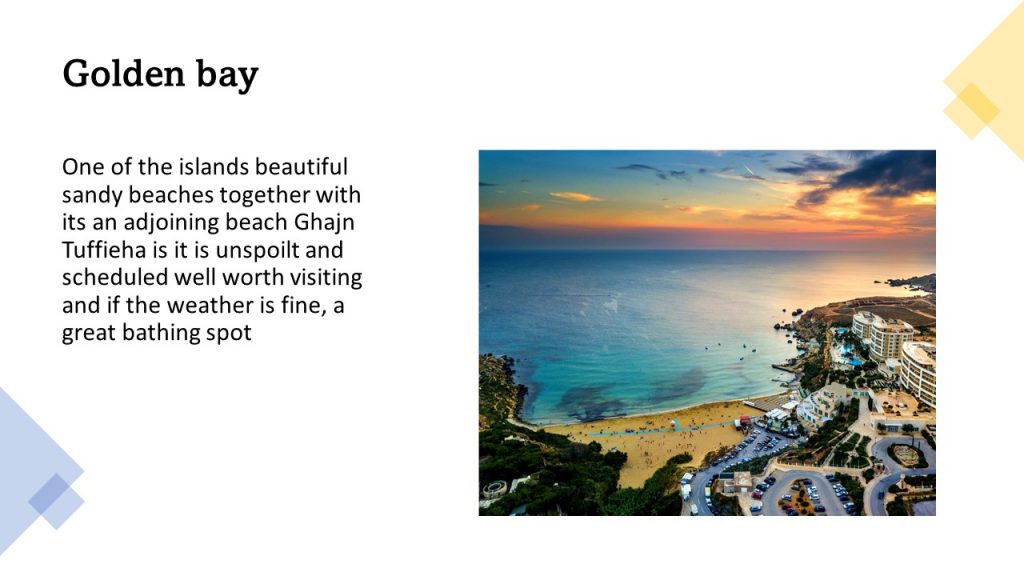 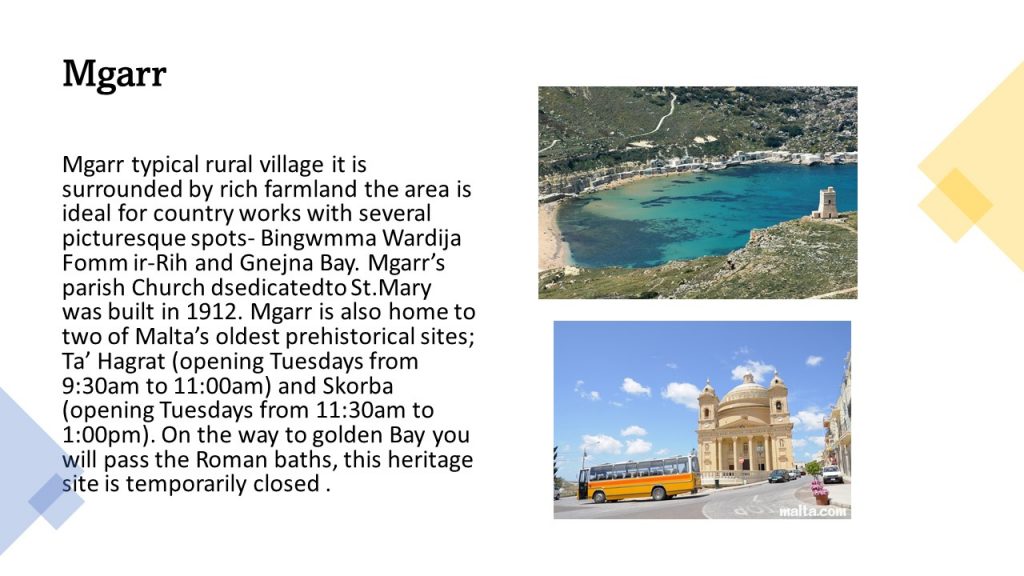 Mġarr (Maltese: L-Imġarr), formerly known as Mgiarro, is a small town in the Northern Region of Malta. Mgarr is a typical rural village situated in an isolated region, west of Mosta. It is surrounded with rich farmland and vineyards. Many of its 3,629[1] inhabitants are farmers or are engaged in some sort of agricultural activity. Maltese pop singers Christabelle Borg and Gaia Cauchi both hail from this town.

Mġarr has two important prehistoric sites: Ta’ Ħaġrat, which is still in a good state of preservation, stands in a field near the village centre; Ta’ Skorba, excavated in 1963, lies just outside the village.

Mġarr’s history is that of a farming community patronized by various of the Mdina patrician families. Mġarr was granted by the King of Sicily to the Inguanez family, and over time they sold it to the Falsone family. Over time, land was divided and given to all descendants.

Fort Binġemma (formerly written as Fort Bin Jema[1] or Fort Bengemma,[2] Maltese: Il-Fortizza ta’ Binġemma) is a polygonal fort in the limits of Rabat, Malta. It was built between 1875 and 1878 by the British as part of the Victoria Lines. The fort has been illegally occupied by the Buttigieg family since 2009, who occasionally use it as a restaurant.[3] It is set on a hill of around 590 feet above sea level. Previous to the building of the fort there used to be a Roman city or village.[4]

Fort Binġemma was built by the British as part of the Victoria Lines, a line of fortifications along the northern part of Malta, dividing it from the more heavily populated south. It is one of three forts built along the lines, the other two being Fort Madalena and Fort Mosta.[5] 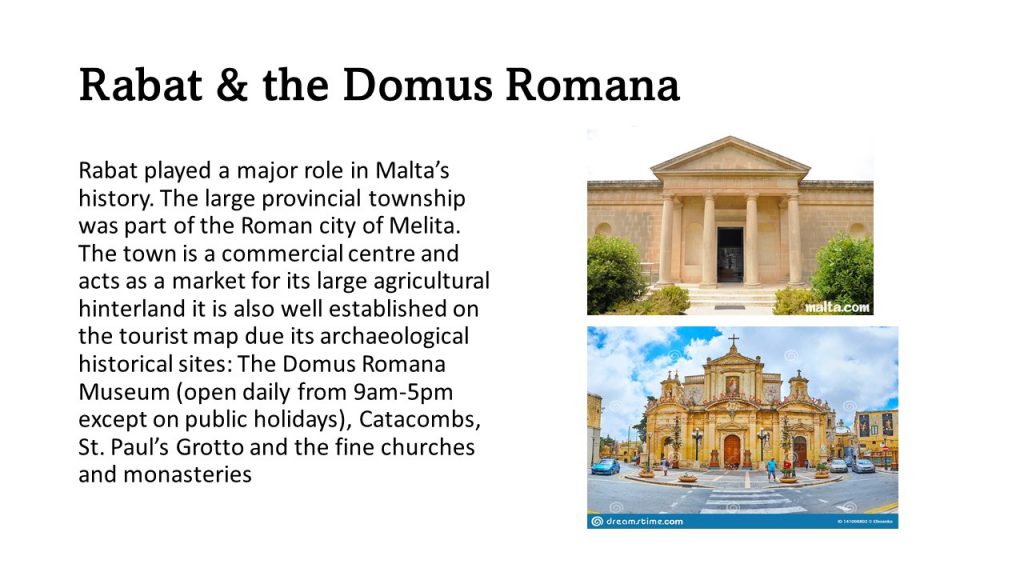 Rabat (Maltese: Ir-Rabat, [ɪrˈrɐbɐt]) is a town in the Northern Region of Malta, with a population of 11,497 as of March 2014.[1] It adjoins the ancient capital city of Mdina, and a north-western area formed part of the Roman city of Melite until its medieval retrenchment. The Apostolic Nunciature of the Holy See to the Republic of Malta is seated in this village. The Local Council of Rabat is also the administrator of Baħrija. Parts of the films Munich and Black Eagle were shot in Rabat. In December 1999, Mtarfa was split from Rabat to form a separate Local Council by Act XXI, an amendment to the Local Council Act of 1993 (Act XV).

The town is named after Rabat, the Arabic term for ‘suburb’, due to its location adjacent to Mdina.

Mdina (Maltese: L-Imdina [lɪmˈdɪnɐ]; Phoenician: 𐤌𐤋𐤈, romanized: Maleṭ; Ancient Greek: Μελίττη, romanized: Melíttē; Arabic: مدينة‎, romanized: Madīnah; Italian: Medina), also known by its Italian-language titles Città Vecchia (“Old City”) and Città Notabile (“Notable City”), is a fortified city in the Northern Region of Malta which served as the island’s capital from antiquity to the medieval period. The city is still confined within its walls, and has a population of just under 300, but it is contiguous with the town of Rabat, which takes its name from the Arabic word for suburb, and has a population of over 11,000 (as of March 2014).[2]

The city was founded as Maleth in around the 8th century BC by Phoenician settlers, and was later renamed Melite by the Romans. Ancient Melite was larger than present-day Mdina, and it was reduced to its present size during the Byzantine or Arab occupation of Malta. During the latter period, the city adopted its present name, which derives from the Arabic word medina. The city remained the capital of Malta throughout the Middle Ages, until the arrival of the Order of St. John in 1530, when Birgu became the administrative centre of the island. Mdina experienced a period of decline over the following centuries, although it saw a revival in the early 18th century. At this point, it acquired several Baroque features, although it did not lose its medieval character. 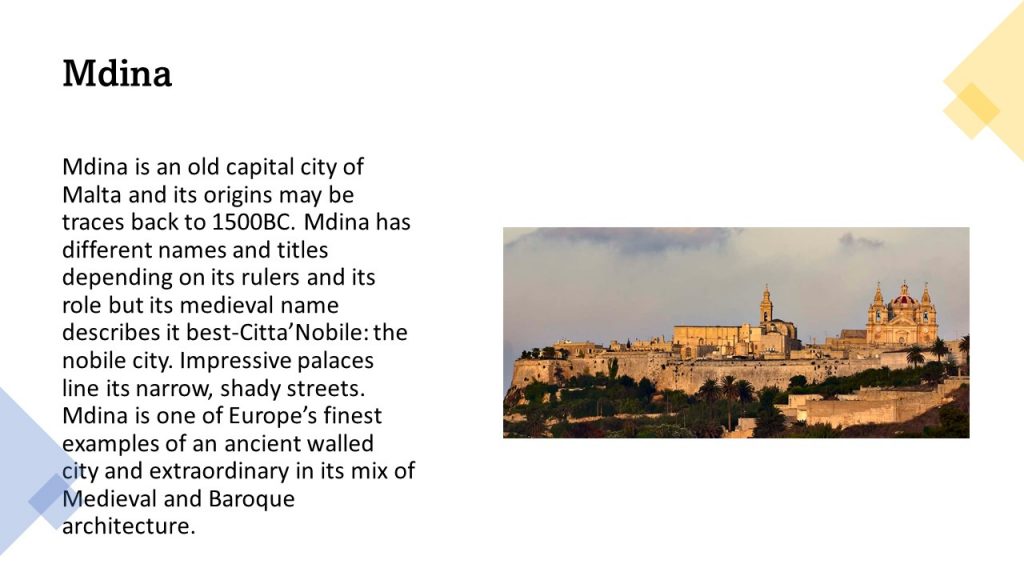 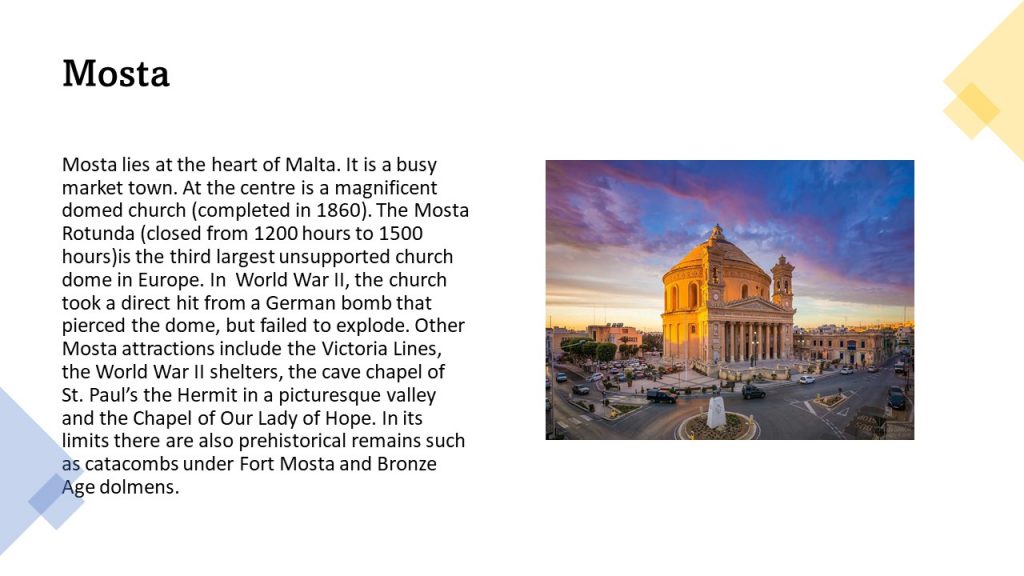 Mosta (Maltese: Il-Mosta) is a small but densely populated city in the Northern Region of Malta. The most prominent building in Mosta is the Rotunda, a large basilica built by its parishioners’ volunteer labour. It features one of the world’s largest unsupported domes, and displays a replica of the World War II bombshell that famously crashed through the dome but did not detonate upon impact.

Mosta celebrates the parish feast of the Assumption every 15 August. Mosta’s feast day celebration is popular among both locals and tourists. The city is annually decorated by local parishioners and townspeople, seeking to demonstrate their affection for the town and its patron saint, weeks ahead of the public procession.

The crafts village in Ta’ Qali is located in the former RAF wartime air-field and is a very popular tourist attraction in Malta. Here, different kinds of crafts and beautiful artefacts are sold created by local experts.

You can watch the craftsmen blowing and forming glass, visit the goldsmiths filigree and beautiful jewellery and have a look at the beautiful sculptures and lace.Attractions – Shopping

Visiting the crafts village in Ta’ Qali, in the outskirts of Attard and a few miles from Mdina and Rabat.

It is a perfect way to spend a day watching craftspeople at work and meeting new people.

Find a special souvenir to take back home to remember your holiday in Malta. 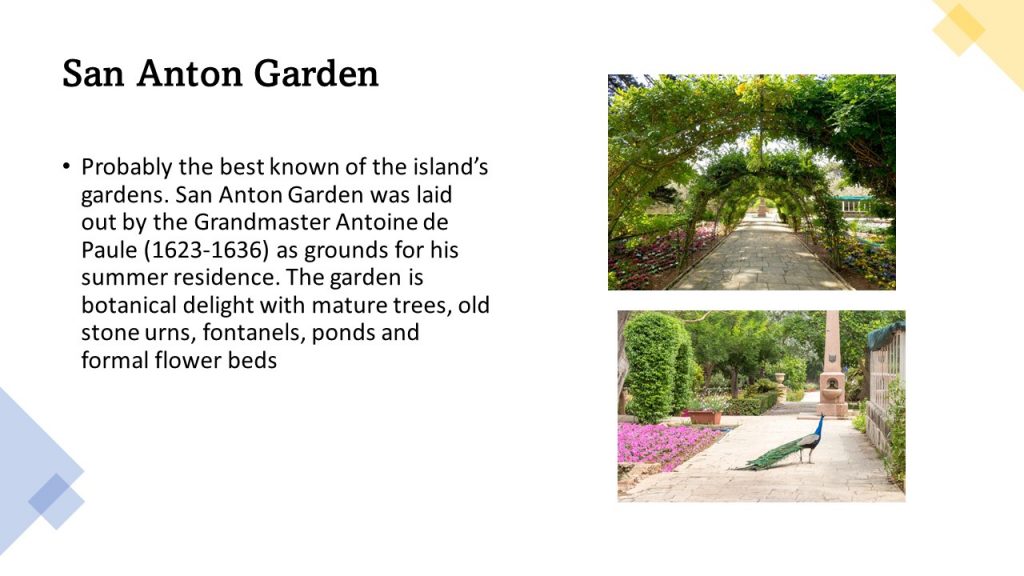 The San Anton Gardens is located in Attard and is one of the most beautiful gardens in Malta with a large variety of beautiful flowers and plants.

This garden has been open to the public since 1882 and it was built by Grand Master Antoine de Paule to complement his summer residence, San Anton Palace, which today is the residence of the Maltese President.

The garden has several walkways that take you through the green gardens where you will discover fountains, ponds with families of ducks and several plants and flowers such as roses, Bougainvillea, Norfolk, Araucarias as well as other trees from all over the world some of them over three centuries old.

The San Anton Gardens are surrounded by walls giving the park a rustic and private atmosphere. 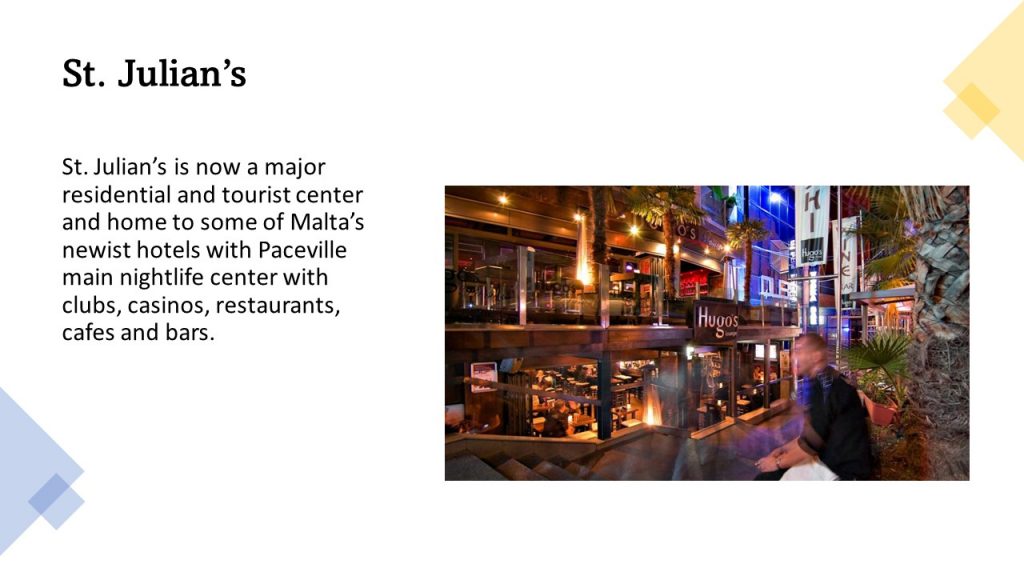 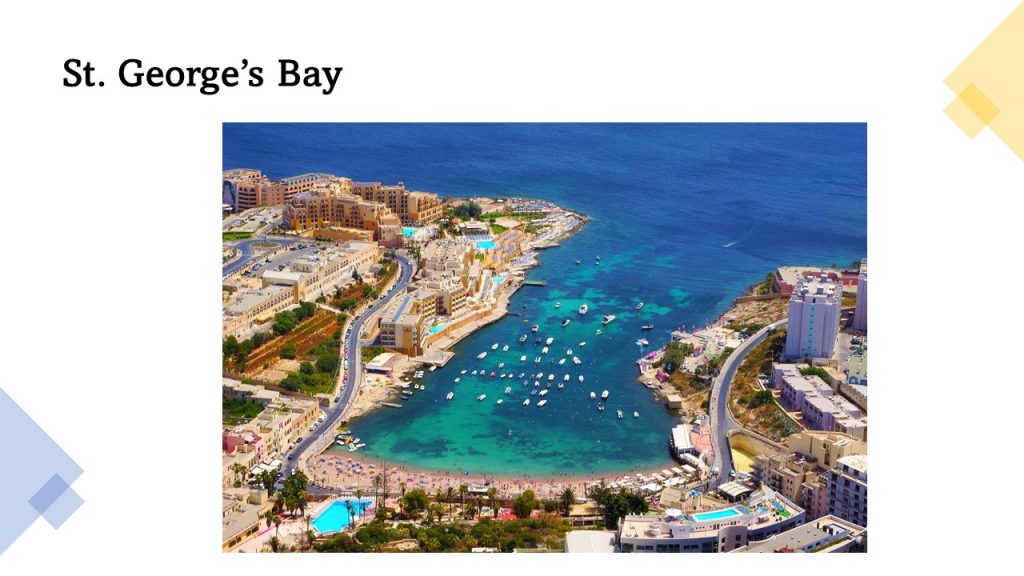 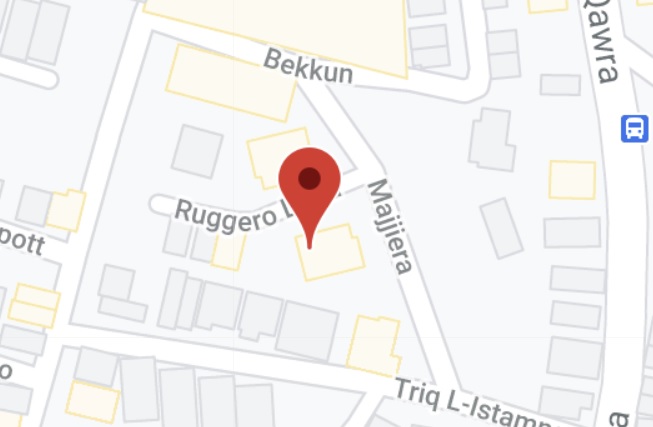